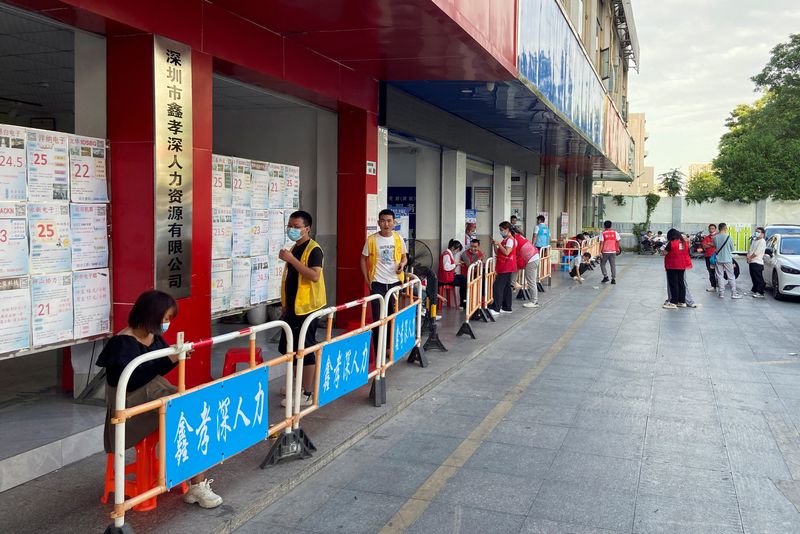 SHENZHEN (Reuters) – Julian Zhu grew up in a Chinese village and saw his father only a few times a year when he returned on vacation from his strenuous job at a garment factory in southern Guangdong province.

For his father’s generation, factory work was a lifeline out of rural poverty. For Zhu and millions of other younger Chinese, the low pay, long hours and risk of injury are no longer sacrifices worth making.

“After a while, this work makes you numb,” said the 32-year-old, who left the production lines a few years ago and now makes a living selling formula and delivering scooters for a supermarket in Shenzhen, China’s southern tech hub . “I couldn’t stand the repetition.”

The reluctance of Zhu and other Chinese in their 20s and 30s to grind factory jobs is contributing to a worsening labor shortage that is frustrating manufacturers in China, which produces a third of the world’s consumed goods.

Factory bosses say they would produce more and faster if younger blood replaced their aging workforce. But offering the higher wages and better working conditions that younger Chinese want would risk eroding their competitive advantage.

According to a survey by CIIC Consulting, more than 80% of Chinese manufacturers have faced labor shortages in the hundreds to thousands this year, accounting for 10% to 30% of their workforce. The Chinese Ministry of Education forecasts a shortage of nearly 30 million manufacturing workers by 2025, more than the population of Australia.

Labor is no shortage on paper: around 18% of Chinese aged 16-24 are unemployed. This year alone, a cohort of 10.8 million graduates entered a job market that, outside of manufacturing, is very subdued. China’s economy, battered by COVID-19 restrictions, a real estate downturn and government crackdowns on tech and other private industries, is poised for the slowest growth in decades.

Klaus Zenkel, chairman of the European Chamber of Commerce in southern China, moved to the region about two decades ago when there was less than a tenth the number of university graduates this year and the overall economy was about 15 times smaller in current US dollars Conditions. He runs a factory in Shenzhen with around 50 employees who make magnetically shielded rooms used by hospitals for MRI scans and other procedures.

“When you’re young it’s a lot easier to do this job, climb the ladder, do some machine work, handle tools and so on, but most of our installers are in their 50s and 60s,” he said. “Sooner or later we have to get more young people, but it’s very difficult.

The National Development and Reform Commission, China’s macroeconomic administration, and ministries of education and human resources did not respond to requests for comment.

Manufacturers say they have three main options to address the labor market imbalance: sacrifice profit margins to raise wages; invest more in automation; or jump on the decoupling wave sparked by heightened rivalry between China and the West and switch to cheaper pastures like Vietnam or India.

But all these decisions are difficult to implement.

Liu, who runs a factory in the electric battery supply chain, has invested in more advanced production facilities with better digital measurements. He said his older workers struggled to keep up with the faster gear or read the data on the screens.

Liu, who like other factory bosses declined to give his full name so he could speak freely about China’s economic downturn, said he tried to lure younger workers with 5% higher wages, but gave him the cold shoulder.

“It’s like Charlie Chaplin,” Liu describes his worker performance, alluding to a scene from the 1936 film Modern Times about the fears of US industrial workers during the Great Depression. The main character Little Tramp, played by Chaplin, can’t keep up with tightening screws on a conveyor belt.

Chinese politicians have emphasized automation and industrial upgrading as a solution to an aging workforce.

The country of 1.4 billion, which is on the brink of a demographic downturn, accounted for half of robot installations in 2021, up 44% year-on-year, the International Federation of Robotics said.

But automation has its limits.

Dotty, general manager of a stainless steel treatment factory in the city of Foshan, has automated product packaging and countertop cleaning, but says a similar solution for other functions would be too costly. However, young workers are essential to keep production going.

“Our products are really heavy and we need people to transport them from one processing step to the next. It’s labor intensive in hot temperatures and we have trouble hiring staff for these processes,” she said.

Brett, a manager at a factory that makes video game controllers and keyboards in Dongguan, said orders have halved in recent months and that many of his colleagues are moving to Vietnam and Thailand.

He’s “just thinking about how to survive this moment,” he said, adding he expects to lay off 15% of his 200 workers, though he still wants younger muscles on his assembly lines.

The competitiveness of China’s export-oriented manufacturing sector has been built over several decades on government-subsidized investment in productive capacity and low labor costs.

The preservation of this status quo is now clashing with the aspirations of a generation of better-educated Chinese for a more comfortable life than the sleep-work-sleep-for-morning meal their parents endured.

Rather than settle for jobs below their educational level, a record 4.6 million Chinese applied for graduate degrees this year. There are 6,000 applications for each civil service post, state media reported this month.

Economists say market forces could force both young Chinese and manufacturers to rein in their efforts.

“The unemployment situation for young people may need to get much worse before the disparity can be corrected,” said Zhiwu Chen, professor of finance at the University of Hong Kong.

By 2025, he said, there may not be a major labor shortage “as demand will certainly fall.”

Zhu’s first job was screwing fake diamonds into wristwatches. He then worked in another factory, molding tins for moon cakes, a traditional Chinese baked product.

Realizing he could avoid reliving his father’s life, he quit.

Now he does sales and deliveries and earns at least 10,000 yuan ($1,421.04) a month depending on how many hours he puts in. That’s nearly double what he would make in a factory, although some of the difference goes towards housing as many factories have their own dormitories.

“It’s hard work. It’s dangerous on the busy roads, in the wind and rain, but for younger people it’s much better than factories,” Zhu said. “You feel free.”

Xiaojing, 27, now earns 5,000 to 6,000 yuan a month as a masseuse in an upscale Shenzhen area after three years working at a printer factory, where she earned 4,000 yuan a month.

“All my friends my age left the factory,” she said, adding that getting them to return would be a big challenge. 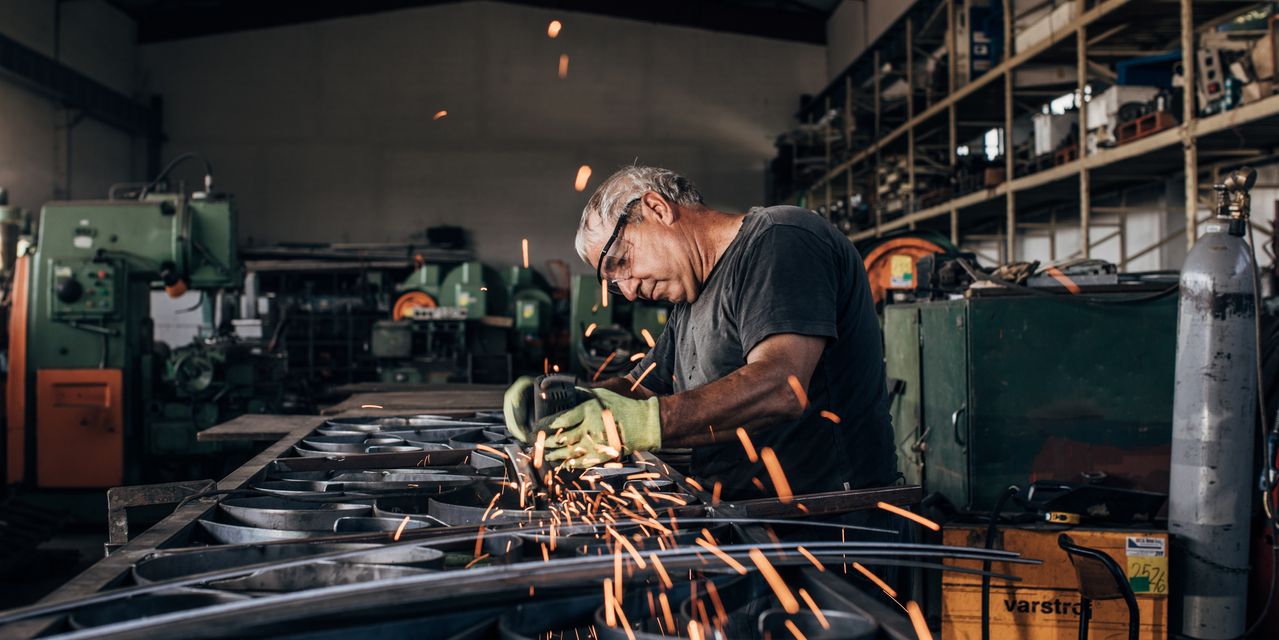 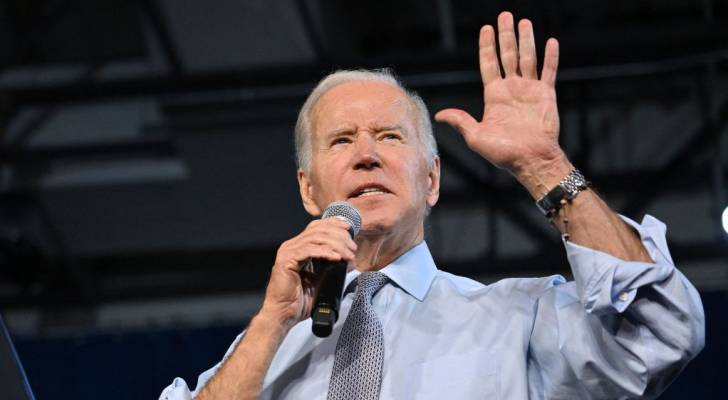 The IRS says its 87,000 new hires could help raise up to $1 trillion – by forcing tax dodgers to pay. But will more “fire-breathing dragons” really be enough?